When we pulled in the long driveway leading up to our new home, we were awestruck at the beautiful pasture surrounding the house. Four and a half acres of grass, only interrupted by a few rows of cedar trees following the driveway and some overgrown brush along the fence line.

A grassy pasture is every homesteader’s dream. It’s land that can be used for gardening, raising animals, or romping around with the littles. And our dream was a garden. Actually, those are all our dreams; a garden is just where we’re starting.

The previous owners had never gardened, as far as we could tell, so we were starting from square one. Here’s how we started our garden from scratch.

We picked out a large area in the front of our house (most of our acreage is in front of our home). This space is relatively level and gets lots and lots of sun – just what our tomatoes and peppers crave! Once both of our kids were asleep, we headed out with a tape measure and marked out where we wanted our garden beds to be.

Next, we went to our local hardware store to rent a tiller for the day. The area we live in has dense, clay soil, so we knew there was no way we’d be able to dig by hand. We ran the tiller through our marked out garden bed; raked the grass aside, and repeated the process three or four times. 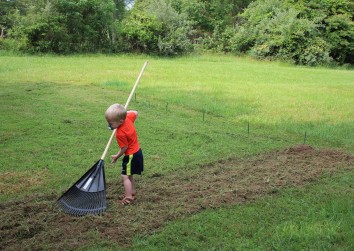 And, of course, Simon joined in.

After we had dug up a few inches of dirt with the tiller, I worked the beds by hand using a garden fork. 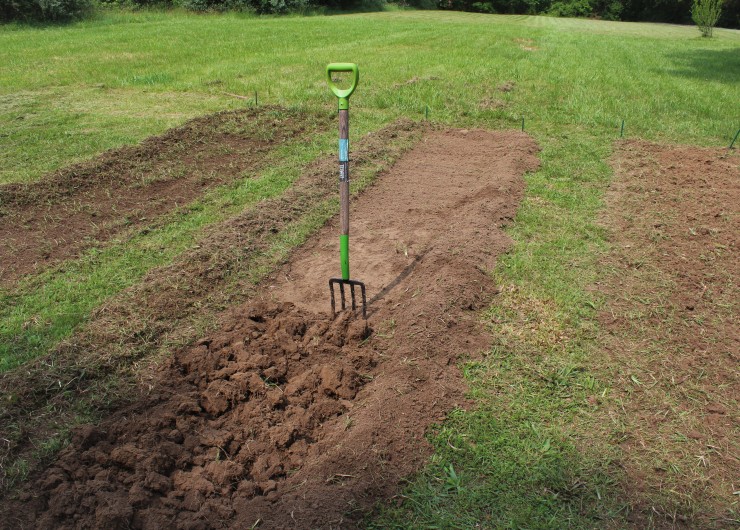 Can you see how dense the soil is?

The garden fork helped tremendously, but we knew if we wanted to give our roots any chance at thriving, we’d have to go even deeper to aerate the soil and break up some of the clay.

A broadfork is basically like a garden fork, but the tines are 12 inches long (meaning they go a foot deep in the soil), it’s about four times wider than a regular fork, and you use your entire body to move the soil.

Talk about a work out. Whew. 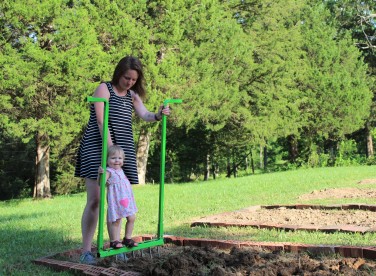 Mom, is that a new garden tool?!

Is it sharp and pointy and heavy enough to smoosh me?

Are you in the middle of using it and trying to finish this garden bed before bath time?

Sigh. Cue both kids running to give it a try – which really just means they giggled and climbed to stand on the main bar. But they’re cute. And excited. And seeing them want to be involved in what we’re doing reassures me that we made the right choice starting a homestead.

And in the meantime, Margie ate some dirt and found a worm. 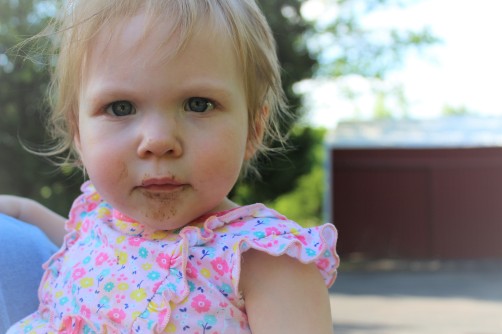 And promptly tried to wear the worm like a necklace.

I think it’s safe to say she’s embraced this life.

We had our garden beds marked with stakes, but because we opted not to put in raised beds, I was worried about the beds getting lost in the grass. When we moved in, one of the few things left behind was about seventy bricks – perfect for lining our first garden bed. I started carrying out bricks to try as a border and loved it! But, we still had five more beds to line with bricks … Phill started searching Craig’s List, and found a guy, not horribly far away, who had torn out an old brick patio. Score!

My wonderful husband made two trips, loading our cars with all the bricks he could. 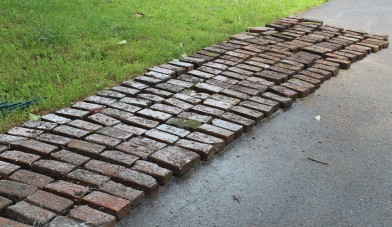 We ended up with almost 300 filthy bricks. But with a quick spray of the hose, they were good as new and perfect for lying in the dirt and protecting our plants.

I took an insane amount of pictures of the bricks.

I couldn’t help myself. They are worn and chipped and moss-covered and beautiful. So much character in a stone. And this hodge-podge of bricks give a rustic, worn, and well-loved feel to our garden.

And they were free. Praise the good Lord! 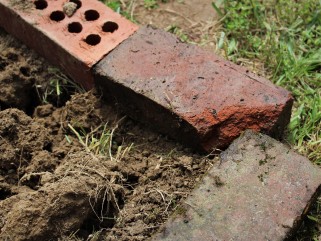 And now with these beautiful bricks, we have a garden. Well, we had a garden before the bricks, but now it feels real. It feels permanent. And I like that feeling. 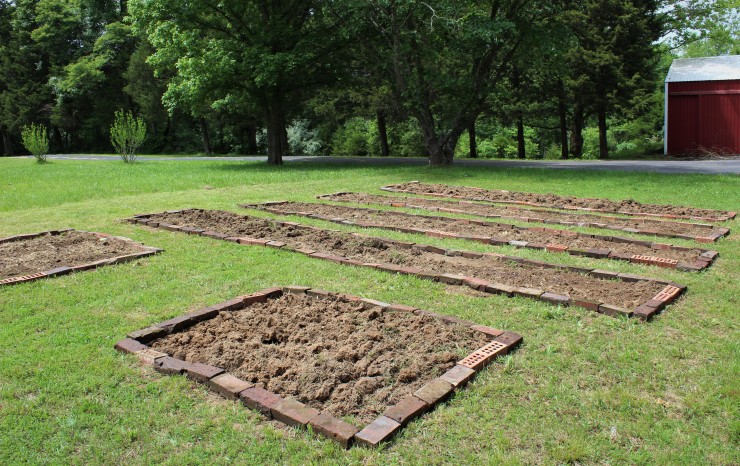 We ended up putting in four beds that were 20′ by 3′ and two 5′ by 5′ squares. Two beds will be full of tomatoes and basil. The other two will be filled with squash, cucumbers, okra, broccoli, and peppers (pending the seeds actually start). One of the squares will be for pumpkins, and the other will be for Simon and Margie to dig and play.

Now, we just need our seed starts to continue growing taller and stronger. In the meantime, we’ll be composting. and re-tilling. and loving the space we have.

May your heart, and garden, be full!

And if y’all have any advice for improving clay-ridden soil, could you drop a note below?