Last night brought an exciting, new adventure to our homestead – baby chicks! Phill and I have talked about raising backyard chickens for years, but prior to our recent move to our homestead, we previously lived in one of the few counties that prohibited chickens. Thankfully, we now live in a place where we can raise chickens, or any other animals we’d like. Pretty sure our neighbor said something about getting rid of a goat … But for now, we’re starting one step at a time, with seven fuzzy little pullets.

Even though we’d talked about getting chickens for years, once we got to our new home the priority was on building a garden and getting our life set up. But after hosting our family for the 4th of July holiday last week and sharing all of our plans for the property, we figured Why are we waiting to get started on chickens?

By we, I mean me. I figured we should stop waiting and basically told Phill I wanted to get chickens this week. So we bought some plywood and Phill built us a simple brooder box.

To start our chicken flock, we decided to bring home a few different breeds of ladies. We’re hoping this will bring some variety to our egg coloring, but also, we wanted to get to know a few different breeds to see what we like best in regards to temperament, egg production, and personality. It’s also the middle of summer, so there was a more limited selection than there would be during spring.

We brought home 2 Rhode Island Reds, 2 ISA Browns, and 3 Ameraucanas.  All three are known to be good for egg production. Hopefully four months from now, we’ll be rolling in farm fresh eggs! Our Reds are a bit bigger than the others, which makes us think they are about a week older. All of the birds are already starting to get their real feathers, so we’re estimating they are between 2-3 weeks old.

Meaning, we need to get building our chicken coop, stat. And by we, I, of course, mean my wonderful husband Phill (who loves building new projects for me and isn’t at all sick of my requests yet).

Simon and Margie are absolutely smitten with the chicks. They constantly want to go look at them, or pick weeds to put in their dish, or, you know, try and climb into the brooder. And who could blame them? If I wasn’t trying to be a semi-responsible or productive adult, I would be sitting in the garage all day just watching them flap their little wings and explore their new home. Truth be told, I find every excuse I can to walk into or through the garage, just to catch a glimpse. It’s so difficult to just let them be and get acclimated to each other!

Our ladies still aren’t named yet. We’ve been going through lists of sevens to figure out what we like best: seven wonders of the world, seven dwarfs, seven cardinal virtues, the magnificent seven, seven seas, seven continents … you get the idea.

Do people even name their chickens? Is that a thing? Well, it will be a thing at our house. And once they’ve all been named, I’ll be sure to share it with you. In the meantime, we’ll be drawing up coop plans and enjoying the sound of our baby chicks.

Have a blessed week and may your hearts be full! 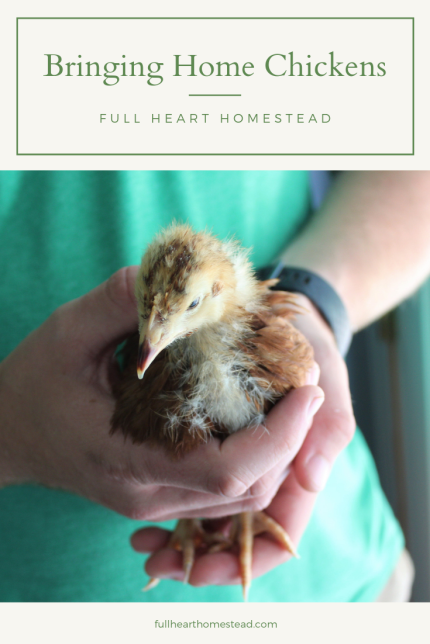 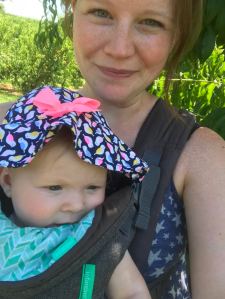